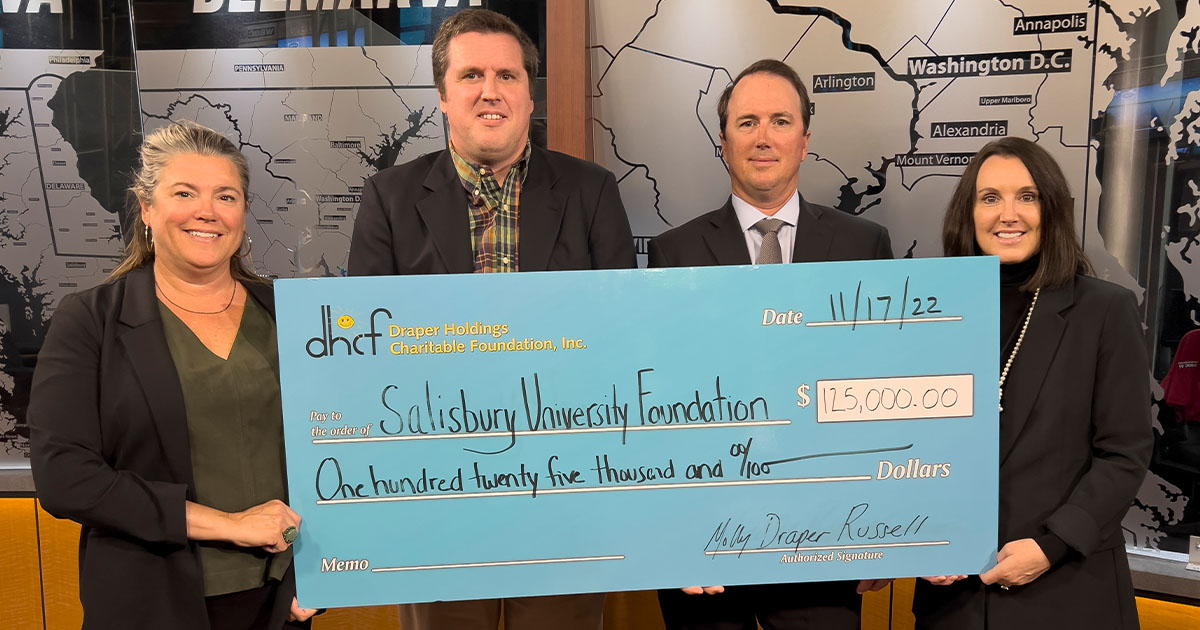 SALISBURY, MD---Tom Draper helped shape the lives of virtually every resident on the Delmarva Peninsula as the owner of WBOC-TV and other broadcast stations until his sudden death in 2017.

Now, his legacy will continue to shape the lives of Salisbury University students through the newly announced Thomas H. Draper Scholarship. The award is the result of a $125,000 gift from the Draper Holdings Charitable Foundation, an organization created by Draper and his family to support educational, scientific, religious and humanitarian initiatives throughout Delmarva.

“Even those who may not have known Tom Draper by name felt his influence,” said Jason Curtin, vice president of University advancement and external affairs, and executive director of the SU Foundation, Inc.

“At SU, that influence was particularly strong as generations of students went on to work for Mr. Draper and his companies. His broadcast outlets also have been instrumental in promoting SU news and events for more than four decades. This scholarship is a fitting tribute for a man who meant so much to SU and to the greater Delmarva community. Even today, he continues to make a difference in the lives of our students.”

“Our family is honored to continue the partnership that our father started with Salisbury University,” said Draper’s daughter, Mariah Calagione, president of the Draper Holdings Charitable Foundation. “The school has educated many of our past and current employees and has created space for learning, culture and athletics in our community. We are excited that this scholarship will support future students attending the University, knowing that they will certainly enrich our society.”

Draper was raised in Milford, DE, and called the Delmarva Peninsula home for most of his life. After earning his bachelor’s degree at Brown University, where he was named an All-American lacrosse player and inducted into the university’s Athletic Hall of Fame, he returned to Sussex County, DE.

There, in 1967, he began his broadcasting career, purchasing a radio station and changing its call letters to WTHD — for “Thomas Henry Draper.” In 1973, he added WAFL-FM. Seven years later, in 1980, he purchased WBOC.

The TV station quickly became a cornerstone of Draper Media, a division of the Draper Holdings Business Trust, with later additions including Fox 21, WBOC Classics (Antenna TV), WBOC-FM and WBOC Digital. Shortly before his death, just days after celebrating his 50th year in broadcasting, he was preparing to launch Telemundo Delmarva.

Applicants for the Thomas H. Draper Scholarship should have an interest in the fields of broadcasting and media (technical, on-air talent, sales, management or creative/digital).