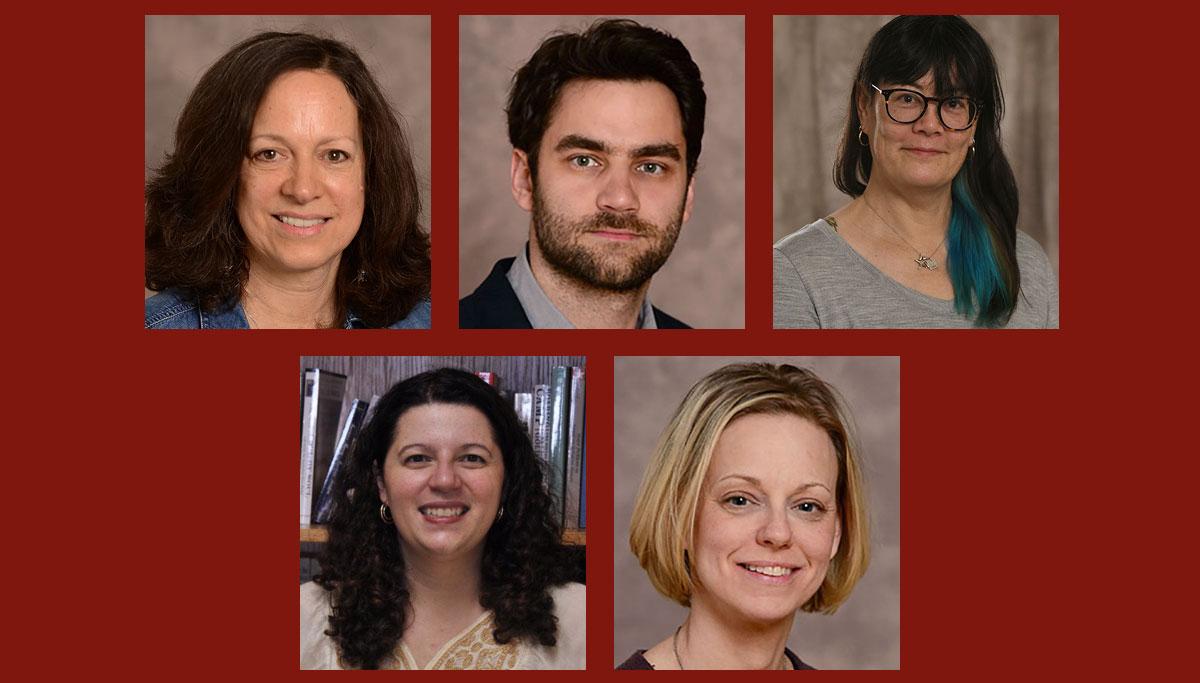 Well, these are faculty who shine, at least in librarians’ eyes! One of the key purposes of the SU Libraries is to help our students become information literate. We do this mostly by partnering with the faculty to teach students how to search for, cite and use information in a variety of formats. We could not reach nearly as many students as we do – a lot! – nor would we have nearly as much impact without our faculty partners. In 2014, we established an award, the SU Libraries Information Literacy Partner of the Month, to recognize those faculty who go above and beyond in working with the Libraries. Here are the winners since our most recent story on the program in Library Matters.

Kara French, History: Ian Post, local history archivist and co-liaison to the Department of History, nominated Dr. French. She has, he noted, over the years, “incrementally added more Nabb and library instruction sessions” to her classes. In the fall, her pro-seminar students “virtually attended the Nabb Center’s permanent exhibit and responded to discussion questions,” used a primary source guide on the side, attended an introduction to Nabb/primary sources, participated in both asynchronous and synchronous primary source sessions as well as library research instruction, and did individual consultations with the archivist. Dr. French also “worked with us to create a women’s suffrage LibGuide, which she then promoted during a news interview about the centennial.” Ian wrote that her women’s history “class session this past semester was one of the best instructional experiences I’ve had.” The Nabb staff “created a guide on the side introduction to primary sources using women’s history sources that she assigned before the session. ... Then [they] led a session with digitized sources related to courtship in the 20th century.” Students were sent into breakout rooms to discuss particular sources and then reported back, leading “to some really rich discussion that touched on many important themes in archival research.” Ian concluded, “Kara has been the collaborative-type of colleague that we dream of, always asking about new ways to incorporate our sources and utilize staff expertise. ... she continues to innovate and spread the word about the Nabb Center to her students, fellow faculty and in the media.”

Emin Lelić, History: Tina Plottel, research/instructional librarian and co-liaison to the Department of History, nominated Dr. Lelić. He previously was IL Partner of the Month in 2018 for assigning students in his HIST 102 sections to create documentaries based on manuscripts or graphics in the Nabb Center’s collections, not only exposing them to original research but also requiring them to conduct secondary research to place the items in context. This year, however, “Emin switched up the documentary project to be a bit easier during the pandemic, so instead students created websites about primary source objects. ... The sections had two library sessions (one for the Nabb and one for library research) and a conference with us about their websites, and Emin involved us in the final evaluations of the websites. Truly a partnership.” She went on to note: “I wish more faculty would invite us to participate in these kinds of creative assignments that holistically include information literacy and interaction with the library.”

Lauren Hill, Clarke Honors College: In nominating Professor Hill, Melinda McPeek, curator of exhibits and engagement for the SU Libraries, wrote: “During the month of September, Professor Lauren Hill helped organize and facilitate three separate events with the Nabb Research Center connected to the Voices and Votes exhibitions. She hosted two social events for her Honors 111 courses that provided students the opportunity to explore Nabb exhibits and brainstorm ideas for research topics. Professor Hill also helped organize a Voices and Votes game night event at the Nabb Center. During each of these events, Professor Hill’s enthusiasm and excitement inspired students to truly engage with the exhibits and activities and in turn prompted excellent discussions. As an added bonus, she always has a bag of snacks on hand for those in need of a pick-me-up!” Professor Hill also earned this award in 2015, jointly with Leanne Wood, for more deeply engaging the students in Honors 111 with the Libraries.

Jennifer Nyland, Biological Sciences: Susan Brazer, science librarian, wrote of Dr. Nyland that “[she] decided that she had such success with the level of information literacy interaction between the library and her HONR 111 class last year that she would like to kick things up a notch and add similar components to the Biology 201 and 202 courses. As such, the students in those two classes now have an online orientation to the library and all work to complete an interactive customized tutorial related to their course-specific needs. These two classes are taught by multiple faculty members and hundreds of students take them every year, so this was no small undertaking on her part!”

Ellen Schaefer-Salins, Social Work: Mou Chakraborty, director of External Library Services and liaison to the School of Social Work, who nominated Dr. Schaefer-Salins, wrote: “[She] understands the role information literacy plays in student learning and has consistently reached out to me for library-related matters. She has integrated library resources in her other classes, but I got to closely work with her when she applied for and received the SU Libraries Course Enhancement Grant for the Disability Studies: Culture and Practice (SOWK 475) course. She involved me from the planning stages prior to applying for the grant and was very receptive to my idea of creating an engaging alternative final assignment to a research paper. Both of us graded the final course assignment based on the jointly developed rubric. I was embedded in her MyClasses course throughout with a separate discussion thread, Ask Mou, where I interacted with the students. She also provided valuable input for the course LibGuide I created. Since this was a fully online course, students did not have any scheduled meeting time. However, Dr. Schaefer-Salins believed it would be beneficial to the students to have some synchronous information literacy sessions. Accordingly, I did three sessions, including a couple to teach the students to use a multimedia tool that was adopted for the final assignment. She invited me to participate in her other classes as well, where students did their presentations and I could comment on them. Working with Dr. Schaefer-Salins has been a model for a true faculty-librarian collaboration. She was willing to let me experiment with the multimedia tool and treated me as a true partner in her course. Since the multimedia tool was very successful with the students in her course, I was able to use it in several other social work courses. I’m thankful that we got to present together (“A Faculty-Librarian Partnership Developing Interactive Curriculum for a Disabilities Studies Course”) at the Council on Social Work Education Annual Program Meeting in October 2021 and that we will be publishing about it."