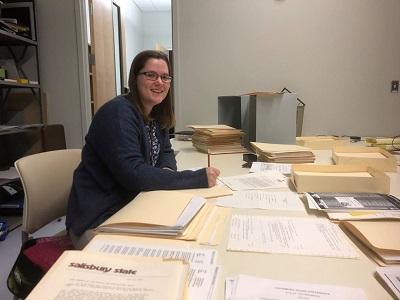 With the closing of campus and the SU Libraries’ physical locations, many of our student workers and part-time staff members could have been thrown out of work, since their jobs often entail working at our public service desks. Happily, we found a way to keep as many of them employed as wanted to, while at the same time continuing to advance our educational mission. While a couple are working on social media projects, thanks to our social media coordinator, Tina Plottel, the majority are transcribing original handwritten documents and oral histories from the Nabb Center, the SU Libraries’ special collections library and archive. We have numerous volunteers transcribing documents as well.

As Jennifer Piegols, our university archivist and special collections librarian, explained: “Cursive has become almost an archaic form of writing in the age of computers and print, especially 19th century and early 20th century cursive, and I’ve noticed that in classes, undergraduates tend to shy away from cursive materials and favor printed texts; I was the same way.” But, she noted: “With a transcription, students can interact on a deeper level with a letter or ledger because they have an easier time reading it and less chance of becoming frustrated or confused at what a person a hundred years ago wrote in sloppy squiggles.”

Ian Post, the local history archivist, observed: “Transcriptions not only make the handwritten items easier to mine for researchers, they also make them more accessible, especially for people who use software assistance to overcome disabilities.” Machines can read the typed text of transcriptions but cannot cope well with handwriting. He added: “We’re so happy and grateful to have everyone’s help and we hope it’ll provide as much enjoyment on their end as usefulness on ours.”

The transcribers are reacting positively to their new jobs. Marcus Tuah, normally a student worker at the Circulation Desk, has been transcribing oral histories dealing with civil rights and race relations. He commented: “I have had a fun time transcribing interviews so far. I have been working on segregation and integration issues that occurred in Salisbury through the eyes of various residents, and it has been really eye opening to hear their stories as they were growing up.”

Lauren Golian, who typically works in the MakerLab and at the Circulation Desk, has been transcribing weather records from the Ocean City Life Saving Station. Ironically, she reported that while she was transcribing, she “received an email from SU’s Biological Sciences Department regarding potential internships at the Life Saving Station.” She remarked: “Immediately, I was fascinated how relevant this project was! The Life Saving Station was created over 100 years ago and yet its responsibility still remains intact today. This transcription project has opened my eyes to the relationship between the past and the present.”

Finally, Emma Sigrist, another Circulation Desk student worker, has been transcribing records from the Holloway Funeral Home. She explained that: “What is most interesting to me is seeing what names survived from the first half of the 20th century. I have also found some fun names I have never heard of. One of my favorites is Lemmeul.”

Others are transcribing all sorts of collections ranging from wartime letters (Civil War and World War II) to church records to a customs ledger and a diary. As Ian Post remarked: “We’re going to make some interesting discoveries in these collections, and it’ll be exciting to share with the world.” In the meantime, we are helping our student workers and part-time staff to keep bringing in some income – a win-win situation.