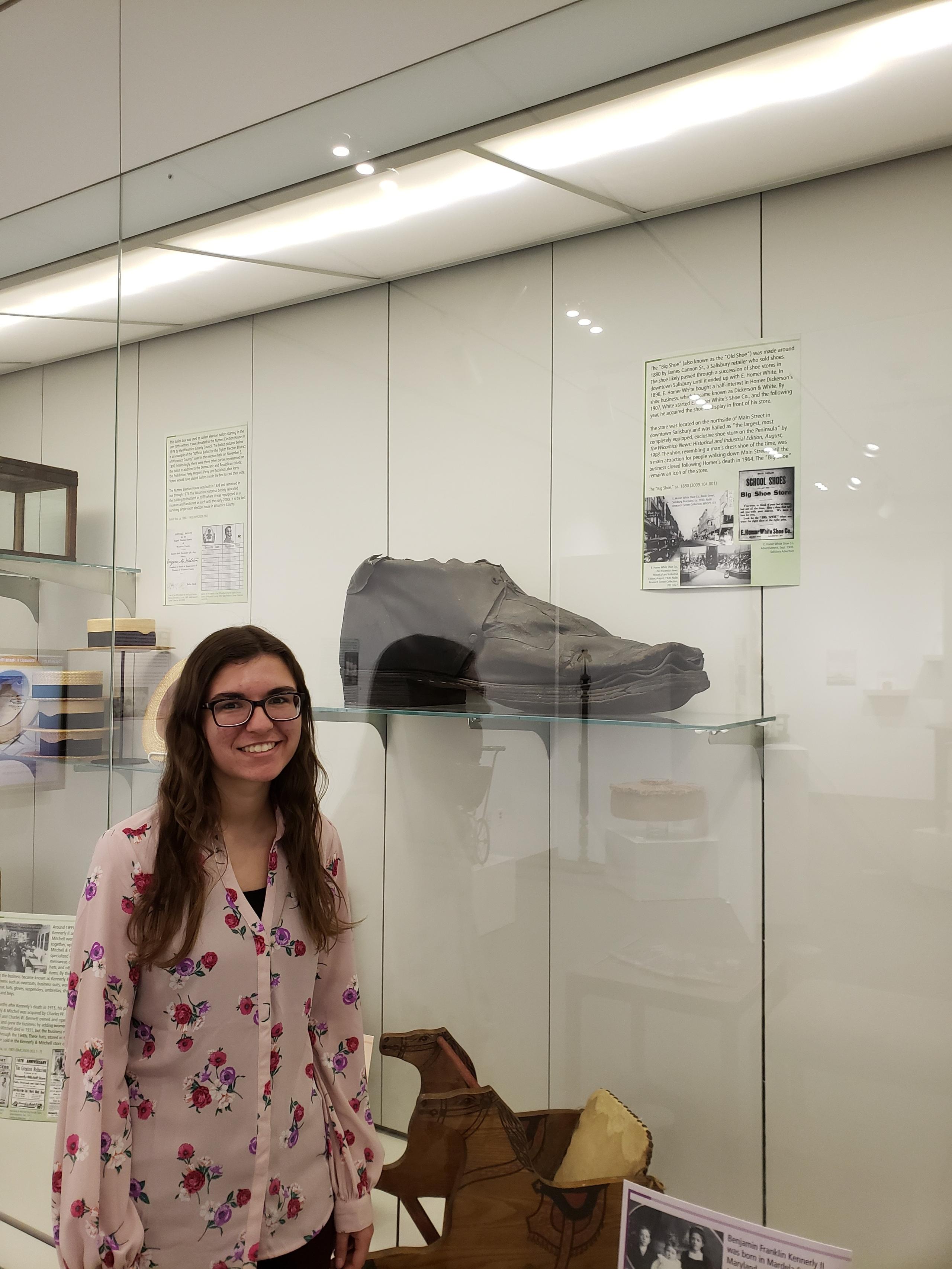 As mentioned in an earlier issue of Library Matters, the exhibit spaces in the Guerrieri Academic Commons are meant as “Exhibit Labs” where students, faculty and staff can share their scholarship and interests by creating exhibits with the assistance of the SU Libraries staff. One of our spring exhibits, If Objects Could Talk: The History Behind Eastern Shore Artifacts, is exactly that sort of exhibit, curated by Nabb Center student worker Jaclyn Laman.

Jaclyn, an elementary education major, first experienced the Nabb Center as an Honors student in a history class that often took advantage of the Nabb Center’s resources. On one visit, she reported: “I noticed a sign on the front desk advertising a summer job as the ‘Curatorial Assistant.’ The position immediately caught my attention, so I applied and have had the job since May 2017.” As part of her job, she has “conducted research, processed artifacts into our database, [and] installed and uninstalled nearly a dozen exhibits.”

Janie Kreines, the former exhibits and artifacts curator, suggested “the idea of doing a student-curated exhibit featuring different objects from our collections that don’t go together but stand on their own.”

Jaclyn quickly agreed. She commented: “I loved the idea of doing an exhibit featuring different objects/artifacts, because I have been working with and familiarizing myself with the artifacts since I got hired. I am also a part of the Honors College, so this exhibit is functioning as my [required] creative project.”

Jaclyn recounted that she especially enjoyed “learning about the different objects and figuring out the stories they hold. All of the objects in this exhibit are from local regions and range in age from over one hundred years old to about twenty years old. Finding the connections and learning about who owned the objects all those years ago truly fascinated me.”

Jaclyn’s favorite objects in the exhibit are the electric lamp and the Big Shoe. She noted: “The electric lamp was purchased by Fred Grier in the early 20th century and used in his family home. What makes the lamp interesting is that it was the first electric lamp in Salisbury! ... It’s insane to think that at one point there was only one electric lamp, and one house with electricity, in the whole city of Salisbury.” Of the Big Shoe, she said, it was “used in downtown Salisbury to advertise E. Homer White’s Shoe Company. The oversized shoe sat outside of the store for years and attracted lots of attention. Again, it’s crazy to think that a large wooden shoe could be used as advertising, but times sure were different a hundred years ago.”

Jaclyn discovered early in her work at the Nabb Center that creating exhibits is a long process. It typically takes one semester “and involves hours of research and writing; meeting with collaborators; choosing images, visuals and/or objects to accompany the exhibit; working with Publications to develop the panels; and installing the exhibit.” She concluded: “It still blows me away how long and arduous the process can be.”

Jaclyn believes that the varied work she has done at the Nabb Center has helped her “to develop and hone several skills – my research, writing and people skills have all improved.” When she becomes a teacher, “I plan on taking all of my skills and experiences that I’ve gained from the Nabb Center into my future classroom.”