In 1989, Charles R. and Martha N. Fulton of Snow Hill, Maryland, endowed and named the Fulton School of Liberal Arts, which offers academic programs based in the visual and performing arts, the humanities, and the social sciences. The Fultons intended their gift to enhance the economic, educational, and cultural resources of the Eastern Shore and to provide for the education of its future leaders.

In 1992 the Fultons built the Snow Hill, Maryland, Christian Nursery School; in 1998, with Richard Henson, they gave $1.4 million to build the YMCA in Pocomoke, Maryland.

Charles R. Fulton (1919-2005) grew up on a farm in Kenton, Ohio and was working in the poultry industry when he met his future wife, Martha Nock, at the 1939 World Poultry Congress in Cleveland. A veteran of World War II, Charles Fulton was involved in Eastern Shore agriculture for more than half a century. In 1965 three of his companies merged with Holly Farms, which Tyson Foods purchased in 1989. He served on the board of directors of Holly Farms and First Maryland Bancorp, the second largest bank in Maryland. In 1998 he received an honorary Doctor of Humane Letters degree from Salisbury University.

Martha Nock attended what was then the State Teachers College in Salisbury in 1937-38. Her classmates included Hamilton P. Fox, later a prominent Salisbury attorney and leader in Maryland politics, Dr. S. Goldsborough "Goldie" Tyler, who later became a professor at the college, future poultry magnate Franklin P. Perdue and his future wife, Madeline Godfrey. The Nock family, originally from Snow Hill, was noted for its philanthropic role in the religious and civic life of the community and beyond, including aunts, uncles and cousins involved in missionary, medical and political work. 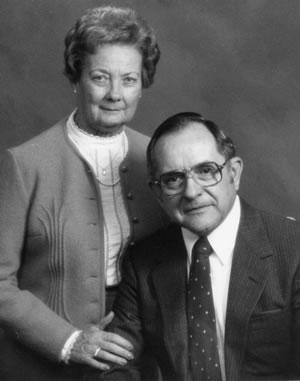